OLD FORT, NC – Bicycling is one of the simplest and cheapest ways to travel. But early bicycles, with their wooden wheels and frames and poor steering, were much different from today’s sleek, multi-geared vehicles made of lightweight composite materials and offering a variety of safety features.

Learn more about the history of bicycles and the sport of cycling in North Carolina at Mountain Gateway Museum & Heritage Center’s newest exhibit, History on Two Wheels. The traveling exhibit will open Saturday, April 9, 2022, at the museum, 24 Water Street in Old Fort. Admission is free.

Developed by the NC Department of Natural and Cultural Resources and the North Carolina Transportation Museum, the exhibition will run through Sunday, October 2, 2022.

Invented about 200 years ago, the first bicycles were made of wood, from their frame to their wheels. In the late 1800s, bicycles evolved, moving toward iron parts. By 1900, elements of the modern bicycle had emerged.

During the “Safety Era” of the early 1900s, upgrades to bicycles made them more sturdy, safe, and reliable modes of transportation with improvements to the seats, brakes, tires, and wheel spokes.

Bicycles offered an option for exercise and faster transport than walking. They represented freedom for women, even as conservatives of the early twentieth century feared they would lead to female corruption. Women pushed past the controversy to enjoy bicycles in all types and sizes, even joining clubs and participating in contests. Ultimately, the bicycle has stood the test of time as a healthy and enjoyable mode of transportation.

History on Two Wheels will:

For more information about the exhibit, visit the Mountain Gateway Museum in Old Fort, view its website at www.mgmnc.org or contact Jesse Bricker at 828-668-9259 or jesse.bricker@ncdcr.gov.

The museum is open year-round from 9 a.m. to 5 p.m. Tuesday through Saturday, and from 2 to 5 p.m. on Sunday; closed on Monday. 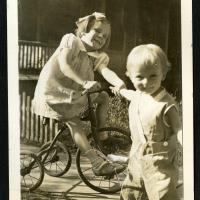