RALEIGH – Gov. Roy Cooper outlined his plans for a phased reopening of North Carolina on Thursday, which included an extension of the statewide stay-at-home order until May 8. “Through our analysis, its clear we are flattening the curve but our state is not ready to ease restrictions yet” said Cooper at the Emergency Operations Center.

The stay-at-home order includes continued closure of dine-in restaurants, bars, and close-contact businesses found in Executive Order 120. “We know we can’t keep staying at home in the long run” Cooper acknowledged in his statement.

N.C. Department of Health and Human Services Secretary Mandy Cohen walked through the metrics set up, which Gov. Cooper said was similar to guidance issued by The White House last week. Cohen said the state had four metrics they were watching to determine when the administration would move to lift the orders. Those metrics are:

Cohen said NCDHHS wanted to see continued decreases or sustained leveling after May 8 in each of these areas.

Cooper outlined a three-phase process to reopening the economy for businesses. In the first phase the stay-at-home order remains in place, but will be modified to allow more reasons to leave home. Citizens of the state will be allowed to go out for commercial purposes without restriction of needed supplies. Retailers and services must continue to operate within previous executive orders in terms of social distancing, reduced capacity, and frequent cleaning. Bans on ‘mass gatherings’ of 10 or more remain in place but parks will be open. Cooper said the restrictions will stay in place for nursing homes and congregate living settings.

After two or three weeks of hitting the four metrics, the second phase calls for the stay-at-home order to be lifted and churches, bars, and restaurants can open at reduced capacity. The ban on mass gatherings will loosen to an undetermined amount of people for a period of four to six weeks.

In the third phase, vulnerable populations can move more freely and venues with reduced capacity continue to open to a “new normal.” Cooper, in closing his prepared remarks, said “We know we won’t go back to the way we lived in January and February. This virus will be with us until we have a vaccine.”

During the question and answer session, Cooper said an announcement on rest of the school year will come Friday afternoon with education leaders. 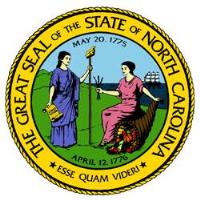